I approached 2015 with less goals in mind and an eye on having more fun running and to not have to race every race. I had run a marathon during the last three years and to be honest I was tired and not interested n going through the training once again. Thus I planned on obtaining a new PB in the half distance and then have more fun, i.e.. run more smaller races with friends regardless as to whether there was any prize or reward or bling aside from the experience.

I also decided that I would cut my distance down, I’ve been lucky that I’ve not yet sustained a serious injury while running but since I hit 45 this year I know that taking care of yourself is more important than ever. I have been interested in the training plan where you run 3 times a week and cross train 1-2 of the other days. One of those runs is speed work, one other tempo work then a long run. I followed this plan for the first half of the year while training for my events and I liked the results so I will continue to follow it. I will modify the long run somewhat to run it at a faster pace than suggested by the plan.

The big running event for me this year was helping and then watching my girlfriend Nicola run her first marathon in Vancouver. We chose Vancouver due to the exotic locale, the presence of her family and the likelihood of good weather for the run. Weather played a huge part of her training for the full and my training for the half as we experienced one of the worst winters in recent memory; lot of snow, lots of cold and ice, lots of wind. To add to the misery, Nicola developed a very, very sore shoulder and neck just before the holidays so most of her training cycle was through  pain. Thankfully the pain subsided near the end and she powered through her long runs and happily she clobbered her marathon in Vancouver. She was smiling and happy when she crossed the line which made me very, very proud.

Before running the half in Vancouver I ran a race in easy April in Lorneville, it’s a hilly course of 13km that gives you a nice indication of your fitness. I nailed it and PB’d by 4 minutes! 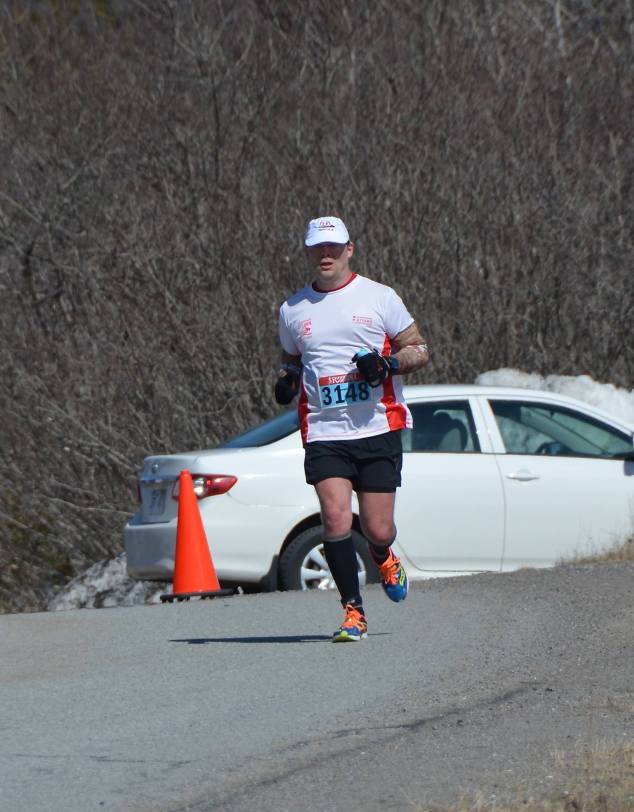 I was happy going into Vancouver and was running with Stephanie who was also shooting for a PB but I wasn’t in a very good state of mind when we started the race however due to organizational issues, according to me, which threw me off, causing me to wall out at 14km…I finished in 2:05 and change but was 6 minutes off of my PB. Happily Stephanie ran a PB, so there was lots to be happy and proud about!

Steph, Nicola and I with John Stanton in Vancouver

After a week of relaxation I restarted my training again as we had decided to run Jonny Miles in late June in New Glasgow. This race had a very good reputation and we were eager to run it for the first time. Nicola and I were also running it with our great friends Rod and Joanna. I was a bit underwhelmed by the race to be honest, especially for a 40th edition. I did manage to run a PB here by about 2 minutes but I still had problems after 16km so I really, really, really need to work on my fuelling. 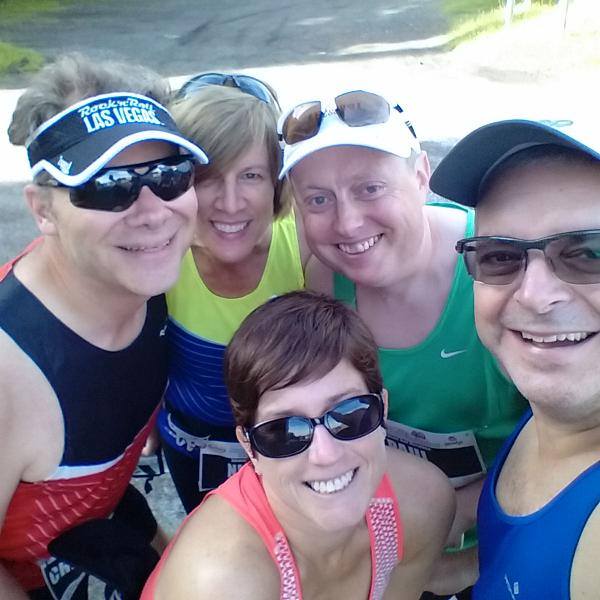 Me, Nicola, Joanna, Paul and Rod in New Glasgow

Through July and August I maintained a relatively good level of fitness as we ran a bunch of smaller races in New Brunswick, the highlight coming when I won the 10km race on Grand Manan Island in July! I wasn’t super speedy, with a wining time around 52 minutes, but I pulled it out when it counted. This was my first ever race win. I also missed one scheduled fun run because I drank too much fine ale the evening before 🙂 but instead of lamenting the DNS, I have more fun laughing at my idiocy 🙂

Joanna, Rod, Nicola and I in Grand Manan

In September I returned to shift work which really hurt my running as finding time to run between shifts is very hard and the runs aren’t of the best quality. Also, for the second year in a row, I was on the organizing committee of the Fall Classic race in Fredericton. Our race had some issues this year but thankfully there weren’t too many complaints. I had already decided to not participate on the committee next year ahead of the problems so the two things aren’t related.

In October, over the Canadian Thanksgiving , Nicola and I traveled to Nova Scotia to run a 10k race, The Valley Harvest and to celebrate the holiday. It was a pretty good day to run and I again ran just around 52 minutes, a decent showing due to my lack of training.

Kate, Me and Nicola in Wolfville on Thanksgiving

Most recently our whole running crew ran the Santa Shuffle put on by the Salvation Army. The day was stunningly beautiful and the weather warm and we had a great time running and laughing, it was a great way to end our racing season.

Me, Rod, Joanna and Nicola at the Santa Shuffle

I enjoyed this year of running, it was mostly relaxed while I watched other people achieve personal bests and distances that they hadn’t thought possible. The last few months have been really, really devoid of runs as I figure out my schedule and other great life developments but I’m confident that I will rediscover my energy once again.

Nicola and I at the Kilted Run

Nicola in front, me in back at Covered Bridge Run

Nicola and I at the Runway Run

Me, Nicola and Myles at Bluenose

This year I will once again train for a marathon in October, the PEI marathon in Charlottetown. Nicola and I are planning to run this one together with a goal time in mind. Also, we will be going to Maine to run a half marathon, which will be my first race in Maine. I also intend to run Lorneville once again and the runway run in Fredericton for the second time. I will try to make the beer run this year, limiting my consumption of ales and hope to run in Saint John as well. A number of smaller runs will most likely fall into some of these weekends and I plan on a few virtual runs during the winter.

I’m not setting a mileage goal once again with the hopes of not having to force myself to run on certain days. I received a new pair of racers for Christmas and I just bought a new pair of trainers so it appears that my mind is in the right place at least 🙂

One Foot in Front of the Other